Waiting on Wednesday is a weekly meme hosted over at Breaking the Spine.
Ok, so this is a book series I love. Absolutely adore.

The book I'm waiting for it... The Dream Thieves by Maggie Stiefvater

The second installment in the all-new series from the masterful, #1 NEW YORK TIMES bestselling author Maggie Stiefvater!Now that the ley lines around Cabeswater have been woken, nothing for Ronan, Gansey, Blue, and Adam will be the same. Ronan, for one, is falling more and more deeply into his dreams, and his dreams are intruding more and more into waking life. Meanwhile, some very sinister people are looking for some of the same pieces of the Cabeswater puzzle that Gansey is after...

This is the sequel to The Raven Boys, and I seriously can't wait to get my hands on it. I loved The Raven Boys so much because it was written so beautifully and it was overall so unique.

I am so jealous of everyone who got to go to BEA 2013! Loads of people managed to get ARCs of The Dream Thieves. They don't have BEA in the UK though. Sigh. Maggie Stiefvater also held an art contest on her tumblr account to make anything art-related - the prize was an ARC of The Dream Thieves.

I'm probably the least creative person you will ever meet so I didn't even try entering the contest. Just look at the name of my blog. I'm not creative.

So I'm waiting for The Dream Thieves. I realllllly hope there's going to be more romance between Blue and Gansey.

Oh, and you can read my review of The Raven Boys as well.

What book are you waiting for?
I'd love it if you left a link to your Waiting on Wednesday, or a link to anything The Raven Boys/The Dream Thieves related.
Posted by Basma at 04:54 6 comments:

My Bookish Review: Lola and The Boy Next Door

Lola and the Boy Next Door by Stephanie Perkins Budding designer Lola Nolan doesn’t believe in fashion...she believes in costume. The more expressive the outfit--more sparkly, more fun, more wild--the better. But even though Lola’s style is outrageous, she’s a devoted daughter and friend with some big plans for the future. And everything is pretty perfect (right down to her hot rocker boyfriend) until the dreaded Bell twins, Calliope and Cricket, return to the neighborhood.
When Cricket--a gifted inventor--steps out from his twin sister’s shadow and back into Lola’s life, she must finally reconcile a lifetime of feelings for the boy next door.

Don’t hate me, but I preferred this book to the first one.

Lola’s a 17-year-old girl who prefers to stand out from the crowd. Her fashion sense is really out there and she doesn’t like wearing the same outfit twice.  She used to know this guy who she’d always play and hang out with when they were young. This guy was Cricket Bell. When they were about 14 or 15, Lola realised she liked him, but then something happened between the two and Cricket moved away. Fast-forward two years and Lola is now 17, dating a guy who’s 22. She’s finally managed to forget about Cricket and her feelings for him, when she looks out her window and finds out that Cricket and his family have returned – something she’s been dreading for those past two years.

Lola isn’t someone I could imagine. She seems so ‘out there’ and unique, and quite frankly, I don’t really know anyone like that. Mostly in the YA section you get main characters who are are always like:

“I’m so shy. I only have like, one best friend, and this really hot guy keeps staring at me but I have no real personality so I don’t really know what to do. It’s dangerous but I’m falling for him.”

I am so tired of main characters who think like that. Luckily, Lola is seriously nothing like that. She’s the kind of person I’d want to be friends with because she’s the  complete opposite of me.

Then there’s Cricket Bell. Oh, Cricket. In Anna and the French Kiss I found it hard to really fall for St. Claire. Don’t judge me, but it was the whole him-being-kind-of-short thing. I don’t have anything against short people – I’m only 5 foot myself. Sigh. It’s just that I get completely turned off if a guy’s short. Sorry.

With Cricket I didn’t have a problem. You know how I just said I can’t fall for a short guy? Well I love tall ones. And Cricket’s tall. He’s very tall.

I always love it when an author brings back characters from previous books – and that’s what Stephanie Perkins does in Lola and the Boy Next Door. So all of you readers who ship Anna and Étienne won’t be disappointed. All of you will probably be jumping around inside whilst trying to maintain a calm facial expression for the outside world.
I just generally recommend this book to anyone. The Anna and the French Kiss books are both so feel-good and romantic. They're also very fit for fangirling over.

5/5 stars – it’s one of those contemporaries that you don’t really forget easily. The ones that are hard to come by.

“I know you aren't perfect. But it's a person's imperfections that make them perfect for someone else.”

I actually haven’t got that many books this week. It’s the half-term holidays here in the UK (Yay!) and so now we all have to go back to school on Monday. I just basically spent the whole week revising and reading. I have so many exams coming up. Wish me luck – I need it.

This is the last one in the Starcrossed trilogy. Sigh. I’m reading it right now and it’s living up to my (high) expectation.

I’ve heard so much about this one – mostly about its cover. I heard that it was going to be a TV show on the CW but it didn’t get picked up. Sad face. I 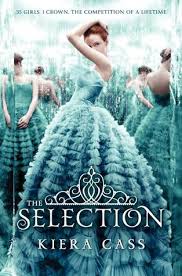 would’ve loved to seen it.

Can’t wait to start this! It seems like a book I’d love and quite a lot of people have recommended it to me. That’s it. Those are all the books I got this week. Sigh.

See, its times like these that I wish my older sister or any of my friends would read. That way I could’ve just asked one of them.

So how was your week? What books did you get?

Basma
Hi, I'm Basma. If you love books we'll get along. You can contact me at babro30(at)hotmail(dot)com